We’re onto Day 3 of my Rome Diary!

If you missed my previous posts, follow the links below:

Making Our Way To The Bridge and Across

At this point, we were still able to use our Hop-On, Hop-Off 48h bus pass that we had bought the previous day. It’s a good thing that we used this method because although am sure the Metro is convenient, you still need to change lines and be mindful of what stop you’re at. Being on the Hop-On, Hop-Off bus keeps your mind off such stress plus you can sight-see on-board in fresh air rather than be trapped in a tunnel! 😛

Here are a few photographs that I took along this bus journey which was about 45 minutes or so:

One thing I realised in Rome at least, is that Smart Cars (and small cars alike) are VERY popular. Although central, people seem to park anywhere and no one gets ticketed. Oh and their petrol stations are mini too – some of which, are situated on the side of the road!

The zebra crossings are also a little bit different to how they operate in the UK. You will see them quite a lot in Rome, even on wide roads as shown. You can almost immediately start crossing and the cars will stop for you. For some reason, I found this fascinating!

Angels Watching Over The City

From a young age, I have always had a fascination with angels. I cannot tell you exactly what it is but I find them so endearing in a spiritual way that brings peace to my wellbeing. I like the idea of angels that watch over you and protect you whenever necessary. Perhaps in it, I believe that there is actually a lot of good in the world, which at times, we doubt just through watching the news daily. I always believe that it’s better to believe in something than not at all. What do you believe in?

We got off at the stop right opposite the Ponte Sant’Angelo. As you walk down this bridge, you will immediately come to see Castel Sant’Angelo. As you can imagine, this was a site that I had been looking forward to visiting and it sure didn’t disappoint! 🙂 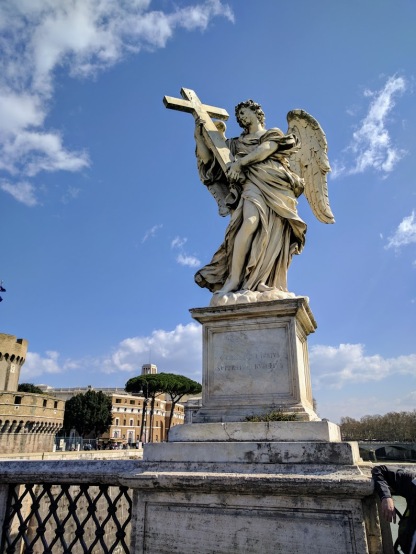 There are in total about 10 angel statues on the bridge (I think) – each one very different from the other. My favourite is this one shown above on the left, that I had previously shown on my Instagram.

You might even recognise the bridge and the castle if you have seen the film Angels and Demons which is developed from a book by Dan Brown.

The view from Castel Sant’Angelo, overlooking the entire bridge.

You can see St. Peter’s Basilica (Vatican City) very easily from the castle.

A window that I thought was really cool and unique. Something I haven’t quite seen before anywhere else!

There was a bar in which you could buy some beverages, cakes and sandwiches. A couple of people sat outside to overlook the views from the castle, particularly that towards St. Peter’s Basilica. 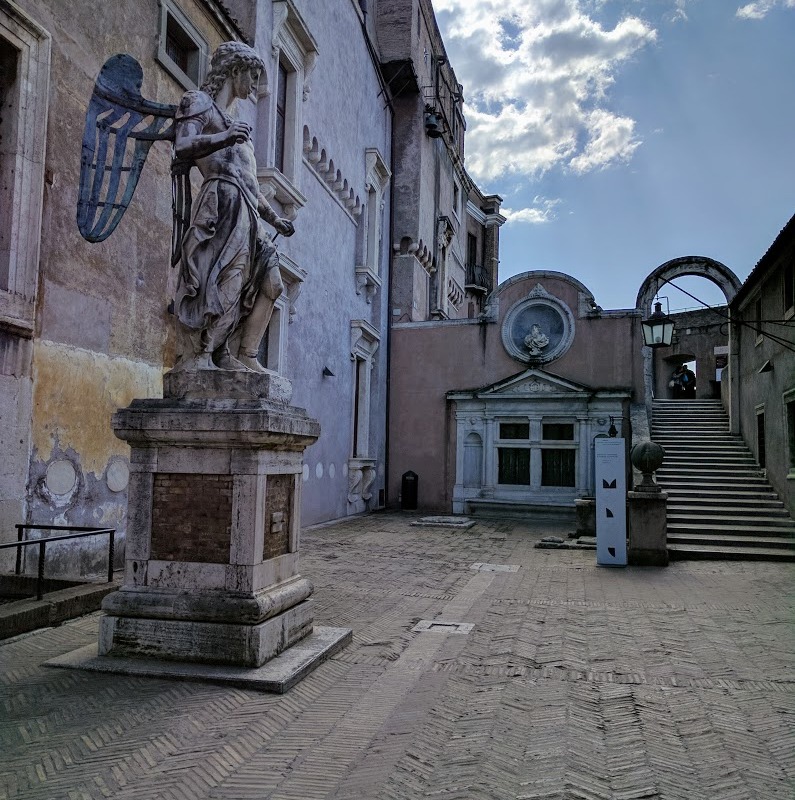 Not far from the bar, you can go inside the rooms of the castle, which feature many artefacts from long ago. You can also witness how the rooms were designed before with the wall and ceiling arts; some of which are comparable to that of a church.

Below is just a handful of this experience: 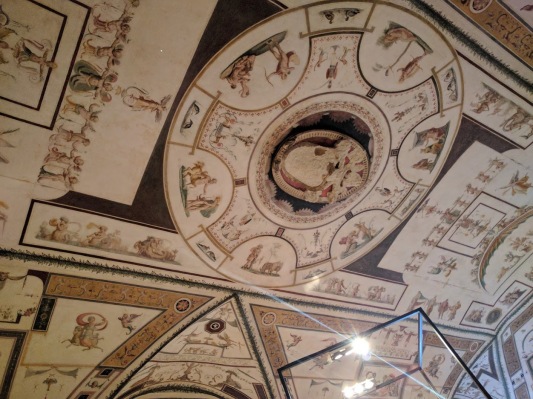 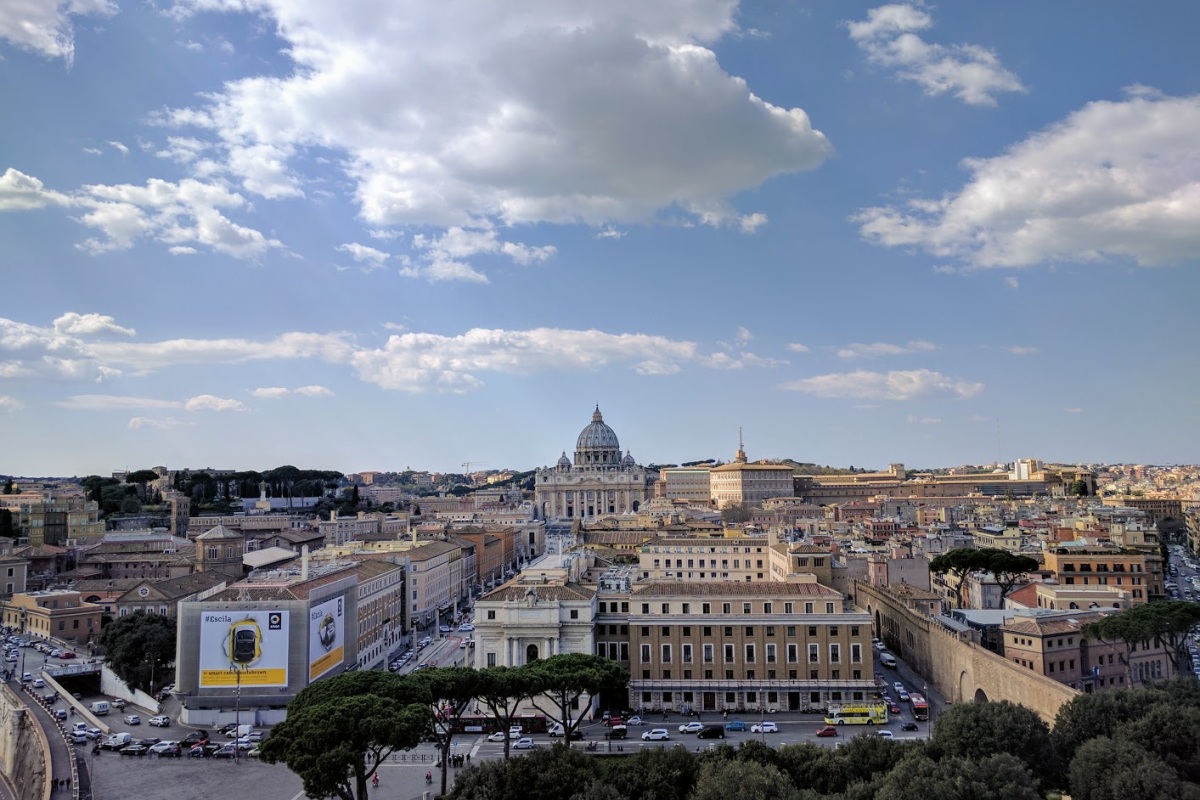 Another view of St. Peter’s Basilica (Vatican City) which houses works by Michelangelo and is known to be incredibly beautiful inside.

If I remember correctly, the castle has 4 floors but we took a while to figure out how to get up to the 4th floor (the rooftop)! We went round in circles for a bit trying to find it, but later asked a tourist. Finally, we went up a flight of steps that had a sign saying ‘no entry’…typical isn’t it? 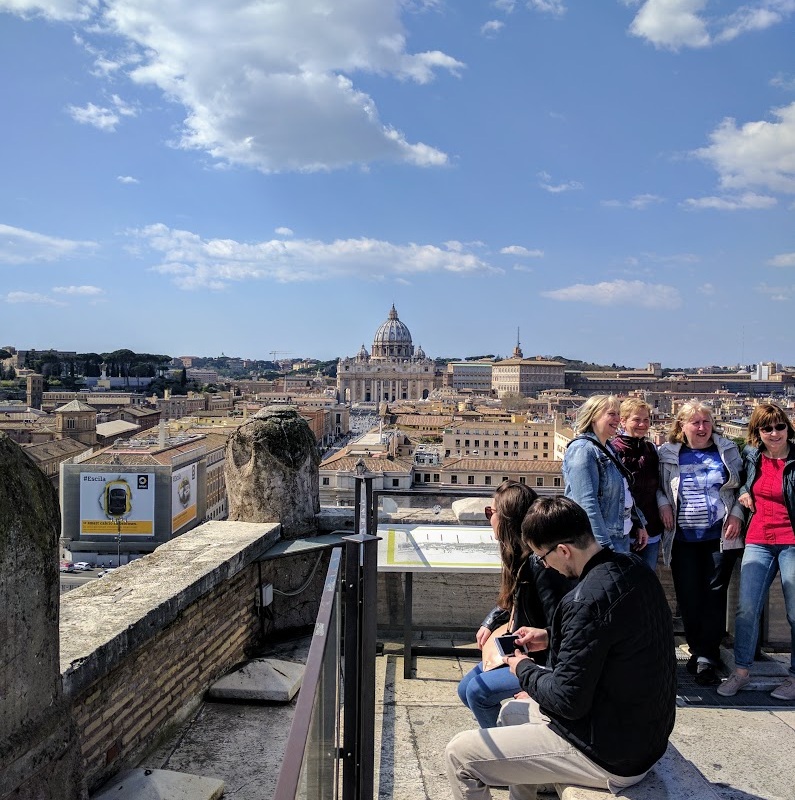 It was like a whole new world up on the rooftop! A bit like a hidden arctic because it took a while to find. Being closer to the sky gives an invincible feeling to the person, do you agree?

An Angel in Battle. This is situated right at the top of the castle, almost acting like a protector of it. It’s interesting to see that all these years ago, Rome isn’t a city that’s heavily based on war but in belief given the amount of churches and Angels that we have encountered on this trip!

A Walk to Vatican City

After spending a couple of minutes on top of Castel Sant’Angelo, we finally came all the way down and out, embarking on our next destination point: Vatican City. I was excited for this but also cautious because I knew it’d be very busy and demanding, so I was prepared for the worse. 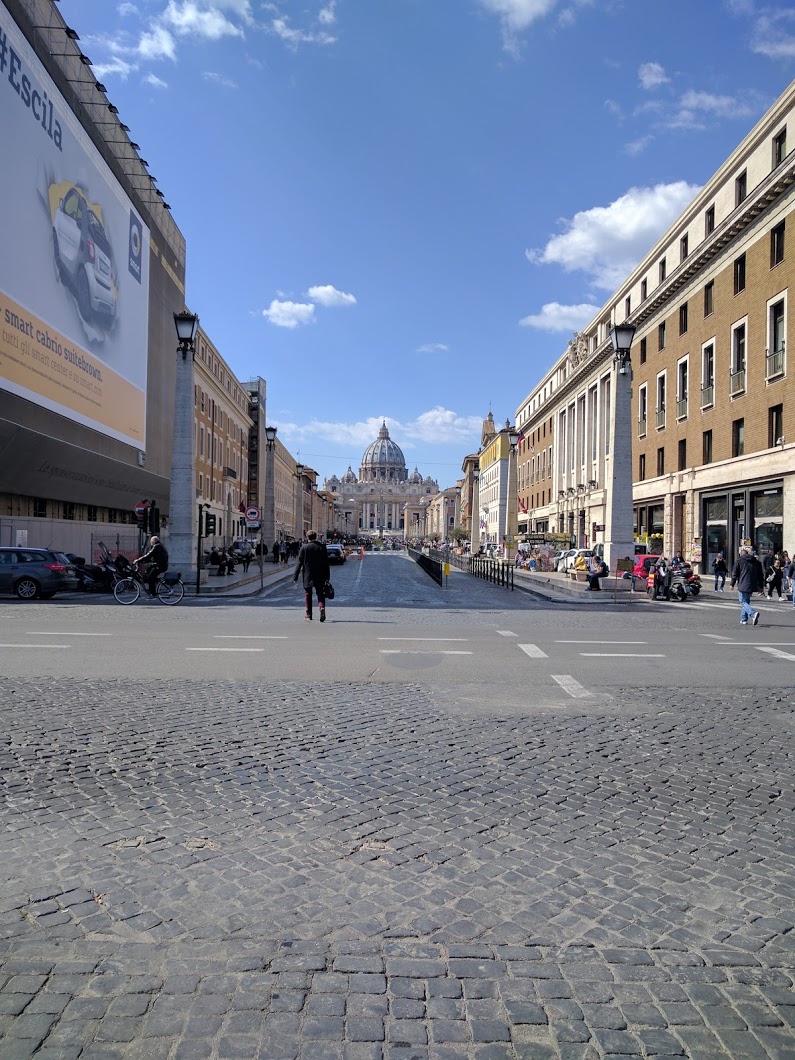 From the Castel Sant’Angelo entrance, if you turn left and keep walking down, you will come to see St. Peter’s Basilica.

A church that we passed along the way. Lots of little children and students were in/near Vatican City! In the entire trip, I didn’t find Rome to be that populated, but Vatican City was something else! Definitely a tourist stop. Did you also know that Vatican City is the smallest state in the world?

When finally arriving in Vatican City, it was a whole different experience. Rome is very beautiful with its impeccable detail in its art, but somehow this managed to be topped even further in this small state.

The following photographs will really do no justice to the actual place, but here’s my two cents:

The endless columns look even more incredible in real life. And those people statues on top? Spectacular.

Unfortunately, we couldn’t/didn’t go inside anywhere of Vatican City – the queue was immense and just looked impossible. I imagine that if we did queue, it’d be hours until we’d go inside which wouldn’t really give us enough remaining time to look at everything seeing as this was in the afternoon already. (Remember when I said earlier, that I was prepared for the worse?)

I realise that there are ‘skip-the-line’ tickets or perhaps even pre-booked tickets, but I felt like it wasn’t very clear regarding the ticket office or if there were different queues for this (there wasn’t much staff to direct on this front.) Instead, I just saw a whole pile of people in a messy queue. So if you do decide in future to visit Vatican City, I’d advise you to do more research than I did and perhaps pre-book your tickets to ensure entry!

Not dwelling too much on being unable to explore Vatican City, we set off on our next destination. That’s the beauty of traveling: always moving forward.