Sourced through Tumblr. Image by Tommy Ton, for Gucci.

If I could crown a fashion house for being able to embrace change, whilst still remaining relevant and true to itself, then I would happily crown Gucci as the winner.

It’s increasingly become hard it seems, to take over a brand, revamp its image and receive positive appraisal. Or at least the last few years say so as many Creative Directors fail to stay longer than 3 years as sales and show response have been nothing short of mediocre. I won’t be naming any names in that category but I will say that Gucci have been going anywhere but down.

The ‘GG’ Logo Makes For A Great Design

If there is something to own by Gucci, then it is the belt. Not a purse. Not a handbag (although don’t say no to that too fast) but a belt. Think about it – you’ll probably change your handbag per season, per mood or per occasion (I don’t suppose a ‘go-to handbag’ exists does it?) but a logo belt can always make a great statement every season, every outfit.

The ‘GG’ logo might be the most elegant logo I’ve seen within ‘logo dressing’. Oh and by the way – ‘GG’ stands for Gucci Ghost or so it seems.

The ‘Double G’ belt as seen in the SS17 show under Alessandro Michele’s direction. 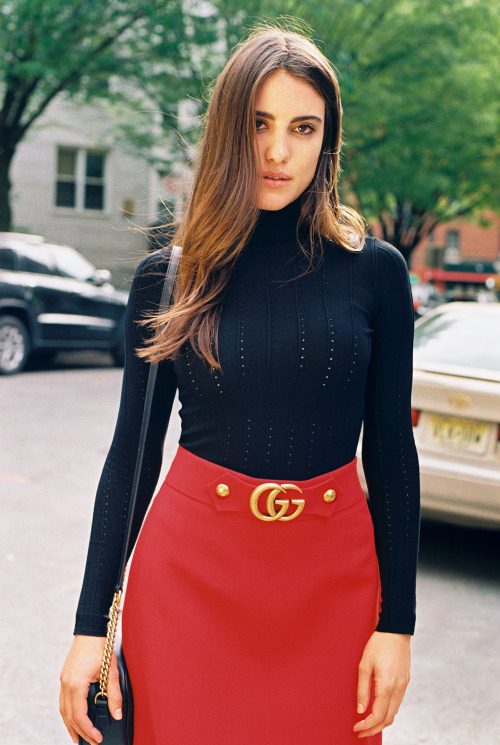 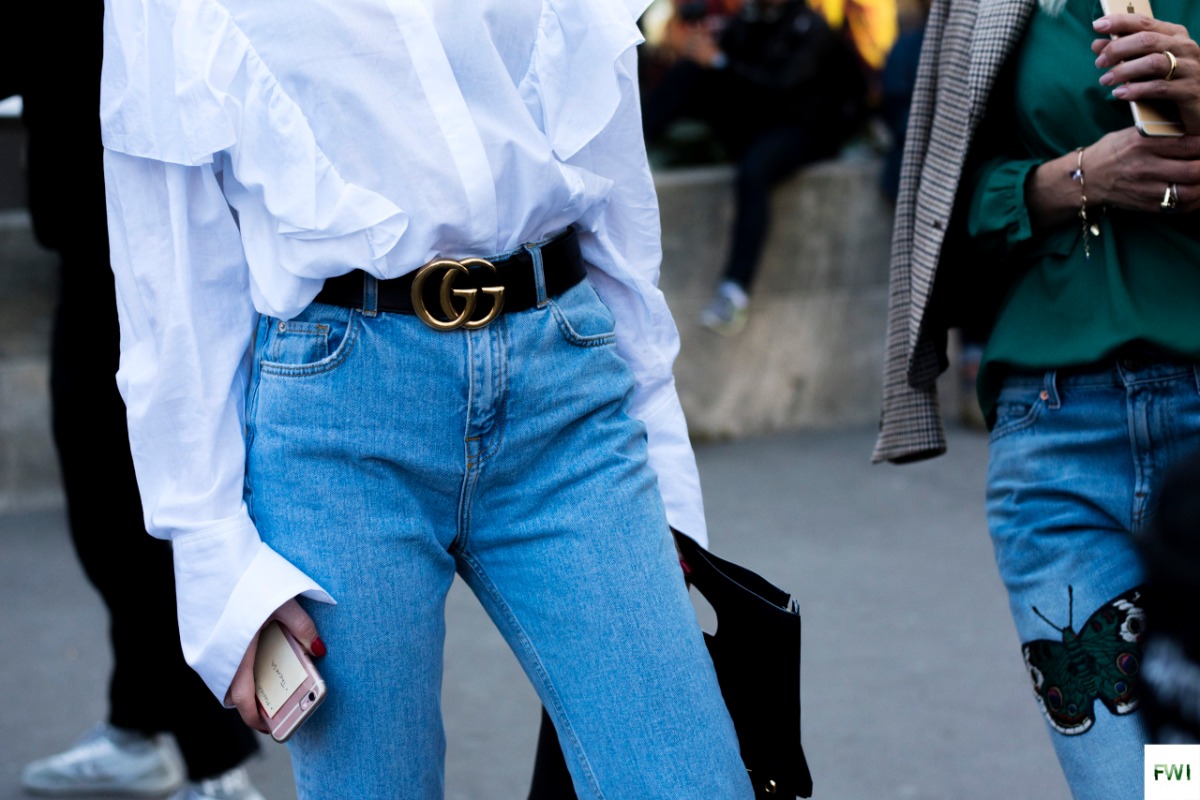 This street photograph was sourced on fashionwildinspiration via Tumblr.

The Gucci pattern? Everyone is familiar with the Gucci pattern right? The GG repeated monogram that has been serving Gucci bags for years recently got an update under Alessandro Michele’s direction to attract younger folks. (Or to simply just keep within the Fashion game to be honest.) Probably one of the most exciting re-branding of a bag that I’ve seen!

The new direction is art-y and wacky, whimsical and nerdy. It demands attention and recognition, a what’s that reaction but in a good way. In a I need to know way though am sure the monogram gives away the brand identity straight away. I wasn’t (personally) too fond of the traditional monogrammed Gucci bags but these recent ones really take my fancy!

When the monogram pattern is not in sight, the next best clue are the colours. (See next point.) Let me tell you: Gucci really know about colours and brand identity. Genius. 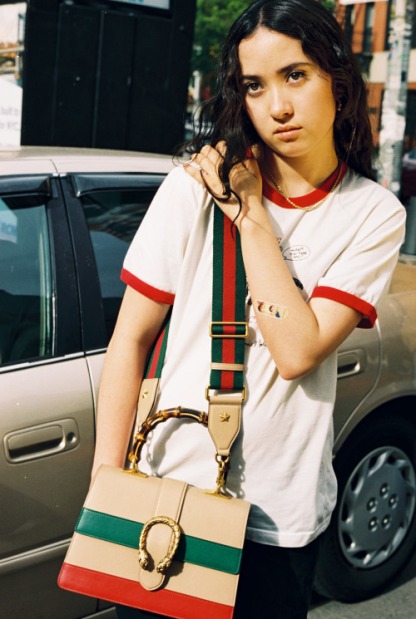 Combine that with smart and fresh design, and you’re really winning.

Green. The colour of Gucci that just so happens to begin with G.

Gucci Don’t Just ‘Get’ Art, But Know How to Use It Too (The Italian Way I might add)

This should come as no surprise because if you have ever been to Italy, the notion of Art is placed really high that virtually, Italian blood is made of Art. Even Italy itself is made of Art with its endless picturesque views. Tradition. History. Isn’t it truly special that all this has remained in Italy for centuries? Religious or not, you will be moved.

Italy is perhaps one of the few countries in Europe that deal with a lot of artisanal work still, and through and through, the quality shows in Italian fashion shows. It’s all Art.

There’s something about the placement of the snake that really works and the textures themselves are not your typical romance. 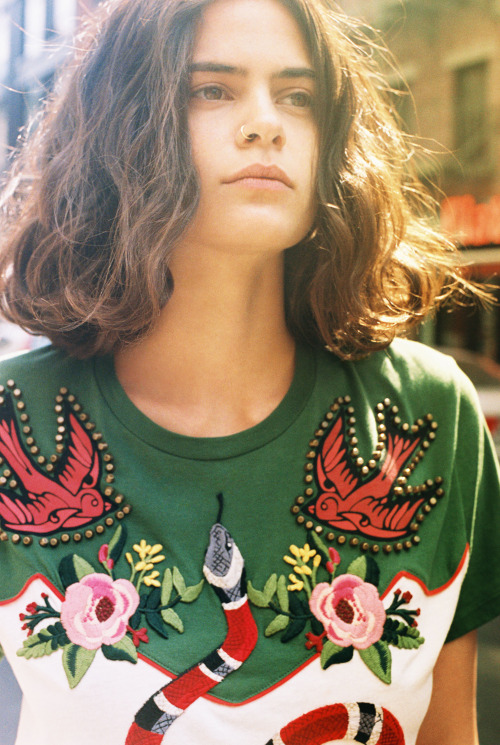 Gucci have really embraced embroidery in the past year that I feel they’re leading the trend of embroidered jeans/embroidered everything else, patchwork…just these artful details that are always in-line with the youth.

The embroidered denim jacket that really took to social media in the last year.

They Know The Way to The Youth’s Heart: Irony

It’s good to not be so serious once in a while, right? And don’t worry, Jeremy Scott is still the King of Irony but everyone still needs to have fun, lighten up, enjoy.

The ones that are to be damned however, are those who blatantly copy and/or produce knock-offs. Gucci’s way of responding to that (so I like to think) is irony. I’m going to re-vamp the whole Gucci pattern and logo but let you know that it’s the real thing, let’s see you copy that shall we? It’s clever. It’s fun. It’s very instagram-able. 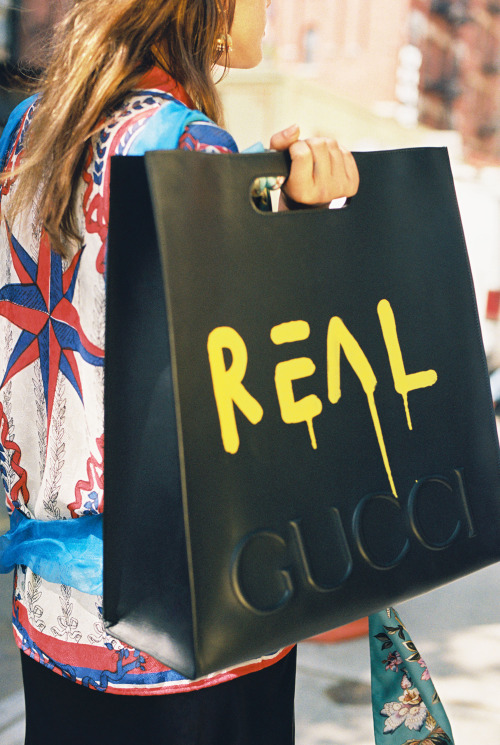 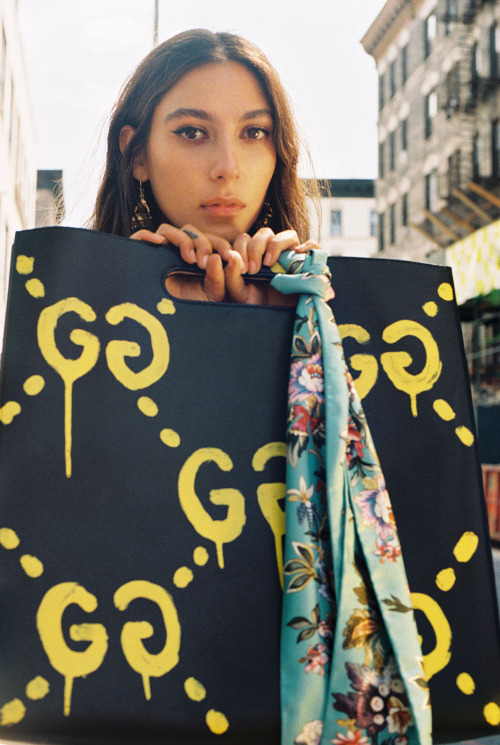 Gucci is simply mocking itself in a way that others really, just can’t. Brilliant. 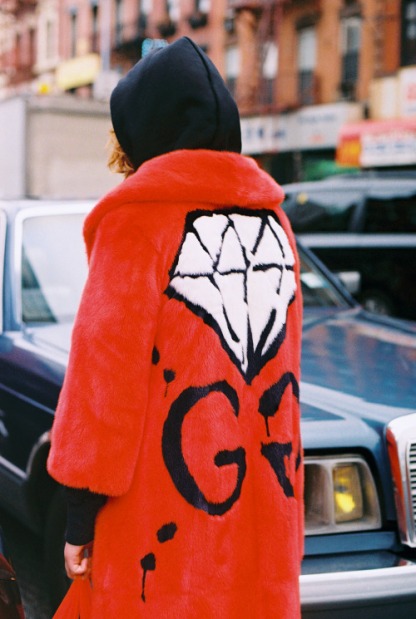 Perhaps  not the most wearable, but one can make it work.

Styling Is Everything If You Still Want To Make It

What makes Gucci’s fashion shows truly magnificent is the styling that bring back feelings of nostalgia and the old classic styling trends. Reinvention. Reincarnation. Rebirth or renaissance (if you wish to get art-y and technical)…Gucci really knows about it because the Gucci woman herself has been re-born.

Mixing the old with the new in a way that is so fantastically recognised as being solely Gucci takes some real skill and adventure. Imagination. It can take you anywhere. In recent years, wearing vintage has been in with the cool kids, but Gucci has made it cooler than ever with its styled muse. Gucci will not follow a trend but make it its own – just know that.

…and that’s a wrap on what makes Gucci ever so relevant now more than ever!

Image Credit: All images respectfully belong to Gucci and are sourced through their Tumblr, including that of street photography/street style unless otherwise stated.

FYI –  this is not a sponsored post. I just really love Gucci 🙂

My head’s no longer underwater
#artvsartist2021 When I was in school, I would struggle to choose even 1 piece of artwork I liked so this is a breakthrough. Only took 15+ years 😌
Somewhere to get you high
Real world or artificial world?
Do you ever think everything that you’ve been working for has been leading to this point?
Your peace shouldn’t come at a price
The days of ‘Sink or Swim’ are over
The moon wants you to know it’s not your fault